Thank you for all the proposals!

At DevRel/Asia 2020, we used an public call for proposal system. As it was our first conference, and online, we weren’t sure if we would get many proposals.

However, we received 124 proposals! Thank you so much! All organizers are voting on the proposals we received.

They are all really interesting and it is hard to decide. However, we have a limited number of sessions, so we have to make a snap decision. We are currently working on that as best we can.

about the number of sessions

There will be five tracks, and we expect to have about 50-60 sessions. On a simple multiplier basis, it’s a little over 2 times the number of sessions. Conversely, more than half of proposals will be dropping out of the conference… and we’re really sorry about that. We are currently looking at maximizing the number of speaking opportunities, including unconferences and LT tracks.

For this year’s DevRel/Asia 2020, not only English, also local native languages are available. As a result, we received applications in a variety of languages, including Japanese, Chinese, Korean, Vietnamese and Indonesian. Here are the graph. 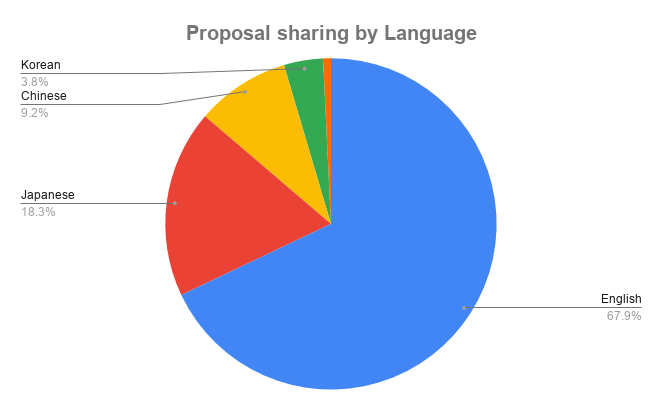 As expected, the largest number of applications were in English, but Japanese did surprisingly well at 18%. Since there were so many proposals in Japanese (and so many that went through), it looks like the Japan track will be solidified with only Japanese proposals.

Voting by the organizers is currently closed. Next, in order to solidify the session content, we are accepting proposals on each track. Once this acceptance phase is underway, an email will be sent to each proposal submitter.

Once they receive the email, they can either accept or decline our invitation to be a speaker. If they accept, they’re cleared to be a speaker! Some of them will be rejected for some reason… if they do, the oppotunity will be moved to the next proposal.

We have a one-week deadline to accept or decline the invitation. So it will take a while for all the speakers to come forward. Please give us a little time.

Still, a number of speakers are already open to the public. The talking detail will be announced separately, so please wait a little longer here as well.

Tickets are already available for DevRel/Asia 2020. Tickets to attend are basically free. We also have paid tickets available for those who want stickers and special novelties. Be sure to get them as soon as possible!

Again, thank you so much for the numerous high-level proposals we received! Of the four key components of the conference (venue, content, attendees and sponsors), we are confident that the content will be great. We hope our speakers and attendees will enjoy DevRel/Asia 2020 as much as we did!